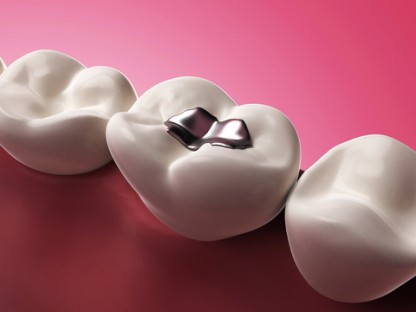 Almost half of US dentists still use dental amalgam fillings (“silver” fillings), which contain about 50% mercury.

Almost half of US dentists still use dental amalgam fillings (“silver” fillings), which contain about 50% mercury. It is now well-documented that small amounts of mercury are continually released from these fillings and absorbed into the body. Scientists have determined that for most people, dental fillings account for the majority of the mercury stored in their tissues, along with fish consumption. People’s mercury levels in hair and urine have been shown to directly correlate with their exposure to mercury-containing fillings. How do you know if this is a concern for mercury poisoning?

The FDA and the American Dental Association (ADA) insist that amalgams are safe and that the low levels of mercury they release and that get absorbed pose no health concerns. However, some experts disagree and assert that the safety of dental amalgams is questionable and poise a mercury poisoning risk. The latest research shows that a percentage of the population is uniquely susceptible to mercury toxicity because of their genetic predisposition. Over the last few years, studies have found that people with specific genetic variants are more likely to experience symptoms of mercury poisoning from fillings and other sources of elemental mercury.

How do I know if I have mercury poisoning?

The range of possible mercury toxicity symptoms is quite large. Mercury poisoning symptoms differ depending on the form of mercury, the dose, and the time period over which the mercury poisoning occurred. Exposure to a large amount of mercury in a short period of time can quickly lead to severe symptoms. But low-grade, chronic exposure to mercury from dental amalgams generally causes more subtle and nonspecific symptoms.

Many of the symptoms of mercury poisoning from fillings are brain-related since inhaled mercury vapor leads to considerable deposition of elemental mercury in the brain. Common brain-related symptoms include fatigue, anxiety, depression, memory loss, and difficulty concentrating. However, the mercury vapor from fillings is also easily inhaled and absorbed through mucus membranes where it is rapidly converted to other forms of mercury and deposited in tissues throughout the body. Therefore, symptoms of mercury toxicity can be physical and body-wide, in addition to being mental and emotional.

Symptoms of mercury poisoning from fillings may include:

First, you may want to go to a physician experienced in heavy metal testing and get an actual lab test measuring your mercury levels. Blood and hair testing is virtually useless for this purpose but a urine “challenge” test run by your experienced doctor can reveal your true mercury load. Next, if your measured levels are excessive or even if you didn’t have the lab test but just suffer from the typical symptoms, you need to get the mercury fillings out of your mouth! So, if you currently have dental amalgam fillings, read our next article here about finding a mercury-free dentist who can remove the fillings and replace them with safer alternatives.

Finally, after the silver amalgams are removed you can start treating the residual mercury toxicity. Sadly, most conventionally-trained physicians don’t consider mercury toxicity when their patients come in with common subjective complaints such as fatigue, anxiety, depression, numbness and tingling, memory loss, and difficulty concentrating, but these are the symptoms of low-grade chronic mercury exposure from such sources as mercury-containing dental amalgams. A physician trained in environmental medicine or functional medicine or who has experience dealing with low-grade heavy metal toxicity will be able to  treat mercury toxicity using various protocols. You can find doctors and dentists like this by using our Directory Listings or by using the directories offered by various integrative medical organizations, including:

What is your own experience with mercury toxicity?

How did you learn of its presence in your body, and what did you do to treat the high mercury levels? Share with other readers in the Comments section and help them make good decisions about their own mercury exposure.