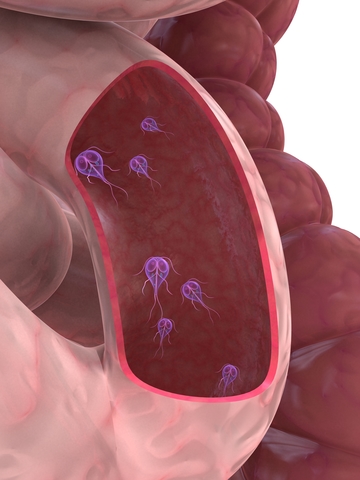 Giardia is a common intestinal parasite which previously was thought to be responsible for mainly uncomplicated infections characterized by diarrhea.

Could a past infection with the Giardia parasite be one of the reasons for extreme fatigue? While it may seem far-fetched that common parasites could be extreme fatigue causes, that’s exactly what new research has discovered.

Giardia is a common intestinal parasite which previously was thought to be responsible for mainly uncomplicated infections characterized by diarrhea. These parasites are now considered capable of being extreme fatigue causes. They can lead to chronic fatigue syndrome that may persist as long as five years after the infection, according to Norwegian researchers who published their findings in the medical journal BMC Gastroenterology.[1]

What Is the Giardia Parasite? It’s More Common Than You May Think

Travel to Eastern Europe (particularly Russia), India, East and West Africa, and parts of the Middle East is associated with giardiasis. Children in day-care centers and people in institutions are common carriers of the Giardia parasite. Campers, backpackers, and people recreating in rivers and streams are all at increased risk. So are people with low stomach acid, such as users of proton pump inhibitors for GERD and acid reflux. Recently, almost 2 percent of samples of ready-to-eat, packaged leafy greens from the U.S., Mexico, and Canada, was found to be contaminated with Giardia.[2]

Around 75 to 80 percent of infected people develop parasite symptoms, while the rest remain symptom-free but can still pass on the infection. Acute, profuse, watery diarrhea is the most common complaint of those who do suffer Giardia parasite symptoms. Other parasite symptoms include bloating, abdominal pain, and gas. In 20 to 40 percent of cases, giardiasis can lead to short-term lactose intolerance. It may also trigger the onset of irritable bowel syndrome.

The infection may be short-lived and go away on its own, in which case no treatment is recommended. If diagnosed (usually with a stool sample), Giardia parasite infection is commonly treated with antimicrobial drugs, such as metronidazole, which are up to 90 percent effective. In some people, such as those with compromised immune systems, the infection can be difficult to treat and become chronic.

Chronic fatigue syndrome, however, was the most commonly identified diagnosis in all the patients still suffering fatigue five years after the Giardia parasite exposure.

How to Treat Parasites and Fatigue

If have a history of being diagnosed with the Giardia parasite and now suffer from chronic fatigue, there could be a link. Working on your gastrointestinal health with integrative and natural therapies is one path toward finally regaining your energy.

Of course, Giardia parasite infections are by no means the only extreme fatigue causes. Most researchers agree that chronic fatigue syndrome is the result of multiple causes and triggers. For example, certain viruses can trigger chronic fatigue, as can nutritional deficiencies, such as iron deficiency. Leaky gut syndrome and adrenal gland exhaustion are also chronic fatigue triggers.