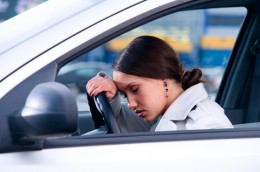 How many times have you climbed behind the wheel despite being sleepy? A study from France shows that extreme fatigue causes almost as many serious accidents as drunken driving.

Drivers who were either drunk or sleepy were at least twice as likely to cause a vehicle accident as their sober or well-rested counterparts in the study, which used information from driver questionnaires and police reports.

Doctor Nicholas Moore and researchers in Southwestern France analyzed information from 679 drivers involved in serious accidents between 2007 and 2009. They emphasized the fact that extreme fatigue causes almost as much risk as alcohol intoxication when it comes to causing a serious crash.  “Sleepiness carried almost as much risk as alcohol ingestion,” wrote Moore and his colleagues in a letter published May 2012 in the Archives of Internal Medicine.

In another study comparing the effects of sleepiness and alcohol, researchers examined the extreme fatigue caused by prolonged highway driving at night with driving impairment caused by alcohol.  Three hours of continuous nighttime driving  produced  an impairment to the driver equal to a blood alcohol concentration of 0.08%, the blood alcohol level considered legally drunk in most U.S. states.

One-fifth of all traffic accidents can be ascribed to sleepiness behind the wheel. Both intoxication and extreme fatigue cause drivers to be more likely to be responsible for the crash and to experience serious injury or death because of the accident.

Four hours of sleep loss = a six-pack of beer

Just four hours of sleep loss in experimental studies will produce as much impairment as a six pack of beer according to Christopher Drake, an associate scientist at the Henry Ford Hospital Sleep Disorders and Research Center in Detroit. A whole night of sleep loss, according to Drake, is equivalent to having a blood alcohol content of 0.19%. That level is well above the legal limit in most US states.

Clearly, extreme fatigue causes impairment comparable to drinking alcohol. If you are already tired before setting off on a trip – especially at night – you are setting yourself up for potential disaster. If you have been struggling with extreme fatigue while not driving, consider the risk to which you are subjecting yourself and others by driving in that condition.

Get your extreme fatigue issues under control in a natural way by reviewing our articles and other content on the subject. Here are some suggested blogs to get you started: