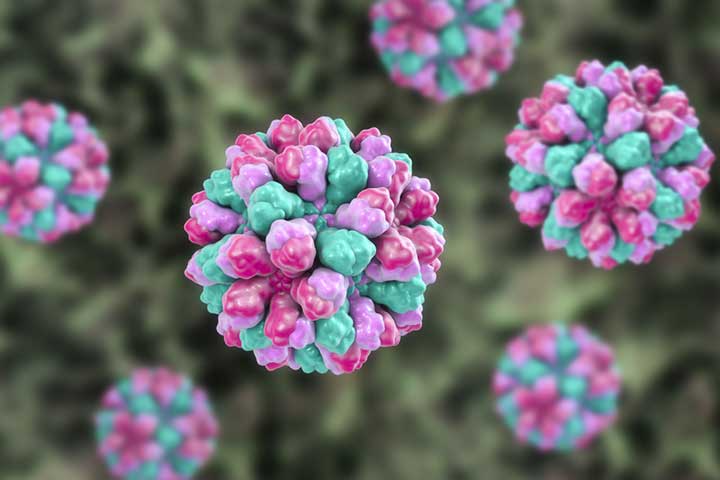 Noroviruses are a group of viruses that cause gastroenteritis (i.e. inflammation of the stomach or intestines), which leads to cramping, nausea, vomiting, and diarrhea.

Intestinal infections tend to hit at the worst times. Five years ago, my husband, two children and I were cruising from one Croatian Island to the next when it happened—gut-wrenching cramps doubled me over while sweat dripped down every crevice. I had gone from feeling slightly nauseous to wanting to die within minutes—all because of an intestinal infection I developed from eating bad tuna 12 hours before.

Whether they’re caused by a food-borne illness, like mine was, a parasite, or bacteria you picked up from your kids, intestinal infections are nasty. They trigger inflammation of the gastrointestinal tract (i.e. the stomach and the small intestine). Their most worrying side effect: dehydration. From recognizing the clues necessary to diagnose your illness to learning how to treat and prevent one from taking over, here’s what you need to know about intestinal infections.

What Are the Most Common Signs and Symptoms of Gastrointestinal Disorders?

The number one sign that you’ve contracted an intestinal infection? Diarrhea. “Most GI infections are caused by viruses, which manifest as a short-lived, watery diarrhea,” says Dr. Daniel Freedberg, MD, MS, Assistant Professor of Medicine at Columbia University Medical Center. “Dysentery (bloody diarrhea) is more likely to be caused by bacteria.” Other symptoms include nausea, vomiting, cramps, and sometimes fever.

How Long Does It Take to Get Over an Intestinal Infection?

It depends on what type of intestinal infection you’re suffering from. While certain conditions, such as a food-borne illness, can be beaten within 24 hours, others, like certain parasites, can take months to get over.

In some cases, time and plenty of fluids are the only treatment for an intestinal infection. For others, such as bacterial infections or parasites, antibiotics may be in order. The most commonly prescribed medicines to treat intestinal infections include fluoroquinolones and metrindazole, azithromycin, and trimethorprim-sulfamethoxazole, says Freedberg. “But this depends entirely on the organism, and a variety of medicines are used, including anti-parasitics.”

There are three main types of intestinal infections.

What to Eat (And Avoid) When You Have an Intestinal Infection

Your first line of defense when you’re suffering from an intestinal infection: drink plenty of fluids to avoid dehydration. Then, slowly try a bland diet known as BRAT (bananas, rice, applesauce, and toast), recommends Freedberg. Steer clear of milk products, though, since most types of illnesses that cause infectious diarrhea cause lactose malabsorption.  “The exact foods eaten are probably not critical,” he says, “but alcohol, milk products, very fatty foods, and foods which may contribute towards diarrhea should be avoided.”

Is an Intestinal Infection Contagious?

It depends on the type. As mentioned earlier, certain infections, such as norovirus, are highly contagious. Others, such as food-borne illnesses, are easily transferrable from infected foods, but aren’t likely to be passed from one person to another (unless you’ve managed to rub raw chicken on your friend’s hands or mouth, for instance). That said, Freedberg says, “most GI infections are contagious, transmitted by accidental ingestion of fecal material. However, exposure to a potential pathogen is not synonymous with infection.” In other words, whether you’ll contract an intestinal infection depends on how many of the infected organisms you ingest (gross!) as well as how healthy you were when you ingested them.

How to Prevent an Intestinal Infection

The best way to avoid getting sick: wash your hands! Also, carefully rinse fruits and vegetables, and cook poultry, meat, oysters and other shellfish thoroughly. Keep food at the correct temperature once cooked (140°F or warmer or 40°F or cooler) to prevent growth of bacterial spores that may have survived the cooking process. Refrigerate food at 40°F or colder within two hours of preparation and reheat to at least 165°F.

“Oral rehydration is the most important home remedy by far,” says Dr. Freedberg. Boost the electrolytes you’ve lost through diarrhea and vomiting by adding a tablespoon of sugar and half a teaspoon of salt to one liter of water. Then, drink up. “When people are dying of infectious diarrhea (usually in the developing world), this recipe saves lives,” he says.=

How Common are Intestinal Infections?

Very, says Dr. Freedberg. “A healthy person can expect to have a—usually mild, usually viral—enteric infection every several years.” Great, something to look forward to!