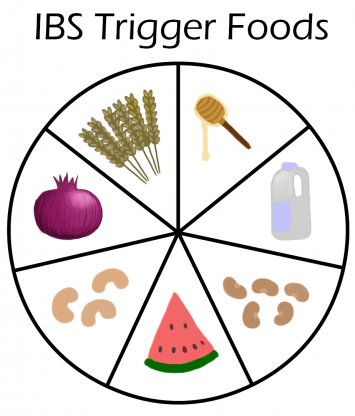 The most consistent and reliable IBS trigger foods found to date are a group of carbohydrates called FODMAPs. Found in a wide range of foods, FODMAPs are – poorly absorbed and therefore become fermented by gut bacteria to produce gas. The word FODMAPs stands for “fermentable oligosaccharides, disaccharides, monosaccharides and polyols.” Let’s take a closer look at the meaning of each of these words:

The following foods are high in FODMAPs and can therefore be trigger foods for IBS. These foods should be avoided for a trial of 6-8 weeks when following a low FODMAPs diet. After that, they can be carefully re-introduced in a slow, deliberate, step-wise fashion in order to determine whether they are specific IBS triggers or not, as well as the extent and severity of IBS symptoms they induce.

A number of randomized, controlled studies have now been published demonstrating how a low FODMAPs diet significantly reduces IBS symptoms[1-4].Overall, the studies show that up to 86% of IBS patients achieve relief of symptoms, especially bloating, gas, abdominal pain, and altered bowel habits, by following a diet low in FODMAPs[1]. In the most recent study, researchers compared a diet low in FODMAPs to a normal Western diet in 30 patients with IBS and 8 healthy individuals[2]. Participants were randomly assigned to groups that received 21 days of either a diet low in FODMAPs or a typical Western diet. They then went back to their habitual diets for at least 21 days, before starting the alternate intervention diet for another 21 days.

Not surprisingly, the healthy controls had minimal symptoms that were not altered on either diet. Subjects with IBS, however, experienced significantly less overall IBS symptoms while on the low FODMAPs diet compared with the Western diet. On a scale of 1 to 100, their average overall symptom scores were approximately 45% on the Western diet and only 22.8% on the low FODMAPs diet. Symptoms were also improved when compared to their habitual diets. Those with IBS had less bloating, pain, and passage of gas while on the low FODMAPs diet, and the consistency of their stools was much improved. The patients with diarrhea-predominant IBS also experienced additional improvements in terms of reduced stool frequency.

To summarize, the low FODMAP diet is now accepted worldwide as an effective strategy for managing IBS symptoms. FODMAPs are carbohydrates with specific properties that make them poorly absorbed. High FODMAP carbohydrates such as wheat and milk rapidly ferment in the gut and have been shown to trigger IBS symptoms of diarrhea, bloating, abdominal pain, and gas. If you suffer from IBS and want to determine whether certain foods are triggering your symptoms, a 6 to 8 week trial of a low FODMAP diet is recommended.

You may also want to consider other possible causes and triggers of your IBS, such as leaky gut syndrome, gluten intolerance, or other food sensitivities identified by an IgG blood test. In addition, you are encouraged to utilize a high potency, high quality probiotic and find ways to reduce the effects of stress, such as the practice of a relaxation technique. Each of these techniques has been found useful to reducing IBS symptoms and provide a number of options for exploration and healing on many levels. If you have tried any of these options for healing your IBS, we want to hear from you! Please share your experience with our readers in the comments section below.[1]