Home » Daily » Depression » Serotonin Deficiency: A Root Cause of Your Depression Symptoms? 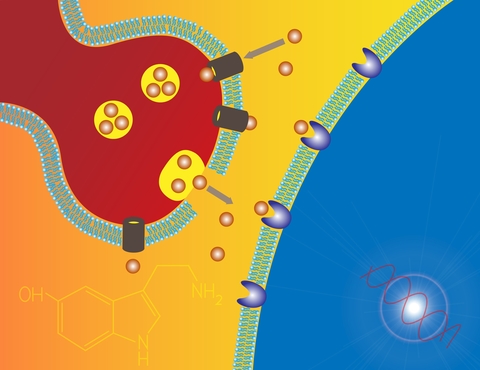 Serotonin is an important chemical that helps relay signals from one area of the brain to the other.

What is serotonin deficiency, and could it possibly be one of the underlying causes of your depression symptoms? Research shows the two are intricately linked!

First, let’s address the question “What does serotonin do?”

Serotonin is an important chemical that helps relay signals from one area of the brain to the other. It plays a key role in psychological functions and is responsible for a feeling of calmness and well-being. Of the approximately 40 million brain cells, most are influenced either directly or indirectly by serotonin. This includes brain cells related to sleep, memory, learning, temperament, appetite and social behavior.

An imbalance in serotonin levels can alter a person’s mood and ultimately lead to chronic depression. That’s why the most commonly-prescribed antidepressants are SSRIs, or Selective Serotonin Reuptake Inhibitors (Prozac, Lexapro, Paxil, Zoloft, etc.). These medications work by changing the balance of serotonin in the brain, which in turn, alters the way brain cells send and receive chemical messages.

(Learn more about the symptoms of serotonin deficiency here: Serotonin Deficiency Symptoms That You Can Identify Yourself.)

If adequate serotonin levels in the brain are so important, the real issue is how to increase serotonin naturally. The compound known as 5-HTP is produced by the body and is a serotonin precursor. However, the seed pods of a West African plant called Griffonia simplicifolia contain 5-HTP, which can be formulated into a supplement.

This 5-HTP has the ability to be converted into the mood-regulating neurotransmitter serotonin as well as the sleep-inducing hormone melatonin. It is a close relative of tryptophan—an essential amino acid found in certain foods (such as turkey and particular types of fish) that is a precursor to serotonin. 5-HTP is part of the metabolic pathway that leads to serotonin production:

5-HTP may be one of the most helpful natural substances to naturally fight depression symptoms. Numerous clinical trials have studied its efficacy and confirmed that the supplement has true antidepressant properties.[1]

Maximum serotonin response occurs when you take supplemental 5-HTP on an empty stomach between 3:00 and 4:00 p.m. and again at bedtime. Start off with the lowest dose—50 mg—take at each of those times with 4 ounces of juice.

After an initial three days of 5-HTP at 50 mg twice daily, increase the dosage to 100 mg at each of the two times and stay at that level. If this doesn’t do the job within four to six weeks, double the before-bed dose to 200 mg. Also, make sure to take a good B-complex vitamin during the day. B vitamins are cofactors for 5-HTP metabolism.

Though having too little 5-HTP is not good for you, taking too much 5-HTP can lead to harmful consequences as well. You should consult with a healthcare professional to know which dose is best for your needs. 5-HTP may not be appropriate for all types of depression and may not be compatible with certain types of depression medication.

If you are taking an anti-depressant, consultation with a healthcare practitioner is strongly advised.

Serotonin deficiency is not the only brain condition that alters mood. Dopamine is another neurotransmitter that actually serves to stimulate the brain. Before beginning a supplement regimen, it is important to learn the true cause of your depression.