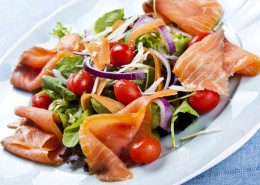 Following a Mediterranean-type diet for depression prevention may be a good idea, according to results from a  study conducted by researchers as Rush University Medical Center in Chicago.[1]

Eating a Mediterranean-based diet comprised of vegetables, fruits, whole grains, fish, and legumes “…may protect against the development of depressive symptoms in older age,” concluded the authors, who published their results in the Journal of Nutrition, Health, and Aging.

To examine whether adhering to a Mediterranean-based dietary pattern is associated with fewer depression symptoms among older adults, Dr. Kimberly Skarupski , PhD, and colleagues from Rush University Medical Center, looked at 3,502 adults aged 65 and over in the Chicago, Illinois area. None of the participants had any evidence of depression when the study began.

At the beginning of the study, the subjects filled out a food frequency questionnaire which was used to evaluate their diets. Diets were assessed and given a score ranging from 0 to 55, called the MedDietScore. The MedDietScore is a well-researched, standardized scoring system that assesses adherence to the Mediterranean diet. Higher scores are given for the more frequent consumption of whole grains, fruits, vegetables, legumes, olive oil, and fish , while reverse scores are given for the consumption of foods that deviate away from the traditional Mediterranean diet (red meat, poultry, and full fat dairy products).

The participants were followed for an average of 7 years, during which time they were periodically screened for depression symptoms including sadness, loss of interest, appetite changes, sleep changes, problems with thinking /concentration, feelings of guilt/worthlessness, and feeling tired/fatigued.

Over an average follow-up of about seven years, greater adherence to a Mediterranean-based diet was associated with significantly fewer newly occurring depression symptoms. The top one third of scorers on the MedDietScore had an annual rate of developing depression symptoms that was 98.6% lower than the lowest one third of scorers. “Our results support the hypothesis that adherence to a diet comprised of vegetables, fruits, whole grains, fish, and legumes may protect against the development of depressive symptoms in older age,” concluded the study’s authors.

Not only is the Mediterranean diet for depression prevention, it’s also for protection from obesity, diabetes, high blood pressure, high cholesterol, and cardiovascular disease

Depression isn’t the only condition from which adherence to a Mediterranean style diet can help protect you. Based on the other studies using the MedDietScore, adherence to the Mediterranean food pattern predicts the likelihood of developing obesity, diabetes, high blood pressure, and high cholesterol. Moreover, for every 10 points you increase your Mediterranean Diet Score, your risk for developing cardiovascular disease over the next ten years drops by 4%.[2]

No one diet for depression may be best, but an abundance of fruits and vegetables is key

Also keep in mind that other dietary patterns besides the Mediterranean one are also associated with protection from depression. No matter what diet for depression you choose, however, all the studies tend to agree that the more fruits and vegetables you eat, the less likely you are to be depressed. For more specific instructions on how to eat the best diet for depression, see our comprehensive guide Natural Remedies for Depression: Beating Depression Without Drugs.