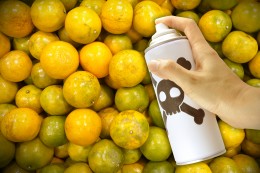 According to researchers at the Colorado Injury Control Research Center, pesticide exposure may lead to depression, anxiety and psychiatric disorders. A study of farmers finds that those with the highest number of lifetime exposure days to agricultural pesticides were 50% more likely to be diagnosed with clinical depression than those with the fewest application days and were 80% more likely if they had applied a class of insecticide called organophosphates.[2] Furthermore, the study showed that individuals with a history of mood disorders may be at increased risk of depression when exposed to pesticides. This study confirms that long-term, chronic pesticide use may have neurological effects, particularly relating to depression symptoms.

Organophosphate pesticides are known for their effects on the nervous system. They were developed from closely-related chemicals that were used as nerve gases during World War II when the Nazi military created an arsenal of chemical warfare agents. Following the war, American companies began marketing organophosphate pesticides for consumer use.  Diazinon is one of the most well-known of these pesticides.

Organophosphates are effective insecticidal agents because they shut down nerve responses in insects and other animals (including humans) by depressing the enzyme acetylcholinesterase (AChE).  AChE affects the neurotransmitter acetylcholine, which is found in the central and peripheral nervous system and red blood cells. Lower amounts of the enzyme means nerves do not stop firing, which can lead to muscle fatigue, spasms, vomiting and eventual death through respiratory shutdown.

Organophosphates are now banned for use as home insecticides due to the poisonous effects of these chemicals on the human body; however, they continue to be widely used in agriculture, including food crops such as fruits and vegetables. Therefore, exposure to organophosphates may be possible via contamination of food sources. In fact, they are the most common form of insecticide in agriculture, making up about half of all insecticides used in the United States.

How Do I Know If My Depression Symptoms Are Due to Pesticide Exposure?

Chronic toxicity refers to long-term or repeated exposures to pesticides. The effects of chronic exposure do not appear immediately and may take years to produce signs and symptoms. Asides from developing depression symptoms, chronic exposure may cause the following:

What Can I Do To Limit Pesticide Exposure?

Be sure and check out our next article as we share one final environmental toxin that may be contributing to your depression symptoms.