Long-term use of antiepileptic drugs (AEDs) is associated with vitamin D deficiency symptoms, even in sub-tropical countries, according to a study at the University of Malaya.

Vitamin D deficiency symptoms have been linked to numerous health problems, including heart disease, depression, and even cancer.[1] Here are 10 signs you’re not getting enough vitamin D:

Other symptoms of vitamin D deficiency include exhaustion and decreased endurance; impaired wound healing (click here); and spasms in the muscles of the hands and feet.

These are the most common causes of vitamin D deficiency symptoms:

Vitamin D deficiency symptoms in women and men, if left untreated, can lead to serious health problems, including:

A 25-hydroxy vitamin D text (or 25(OH)D text) is usually measured in nanograms per milliliter, or ng/mL. But even after a test, things can get murky. Why? Because there’s debate among experts as to what blood level results are “deficient” and what levels are “insufficient.”

Most would agree that a vitamin D level lower than 10 ng/mL signals a deficiency.

Integrative doctors, as we discuss later in this post, may recommend higher levels—between 50 ng/mL and 70 ng/mL.

Your health, age, and lifestyle may affect what your ideal level should be; your physician will point you in the right direction. But ultimately, the most commonly accepted range for “adequate” vitamin D levels is 30 to 39 ng/mL, while the most commonly recommended “optimal” range is 40 to 49 ng/ML. (See chart below.) 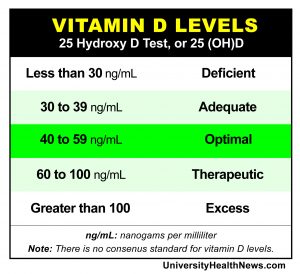 The so-called 25-hydroxy vitamin D test—or 25(OH)D
test—provides vitamin D blood level results in nanograms
per milliliter (ng/mL). You’ll find a variety of opinions as
to vitamin D levels, but the most commonly accepted
“adequate” and “optimal” ranges are 30 to 39 ng/mL and
40 to 59 ng/mL, respectively

It’s No. 1 on the list above that we’ll examine more closely here. After all, the link between depression and vitamin D deficiency symptoms has long been established in both children and adults.

Vitamin D is available in two different forms—D3 and D2. Research has shown that the connection between vitamin D and depression relief is linked to the D3 form—the same form of vitamin D that’s obtained through sunlight. Scientists have found that people with low vitamin D symptoms are 11 times more prone to be depressed than those who had normal levels.[2]

Vitamin D deficiency is actually more the norm than the exception, and has previously been implicated in both psychiatric and neurological disorders. Why? There are vitamin D receptors in the brain, and the vitamin may affect proteins in the brain known to play a role in mood, learning and memory, motor control, and possibly even maternal and social behavior.[3]

There may be more to your depression, of course, than low vitamin D levels. Other causes of depression include poor adrenal function (adrenal fatigue), neurotransmitter imbalance (serotonin and dopamine, for example), sex hormone imbalance (estrogen, testosterone), environmental factors, or other nutrient deficiencies (magnesium, for instance, and omega-3s). But it makes sense to explore whether or not vitamin D is contributing to depression.

A study conducted by Boston University researchers revealed that vitamin D deficiency actually affects your DNA: “Any improvement in vitamin D status will significantly affect expression of genes that have a wide variety of biologic functions of more than 160 pathways linked to cancer, autoimmune disorders and cardiovascular disease.”[2]

This article was originally published in 2013 and is regularly updated.