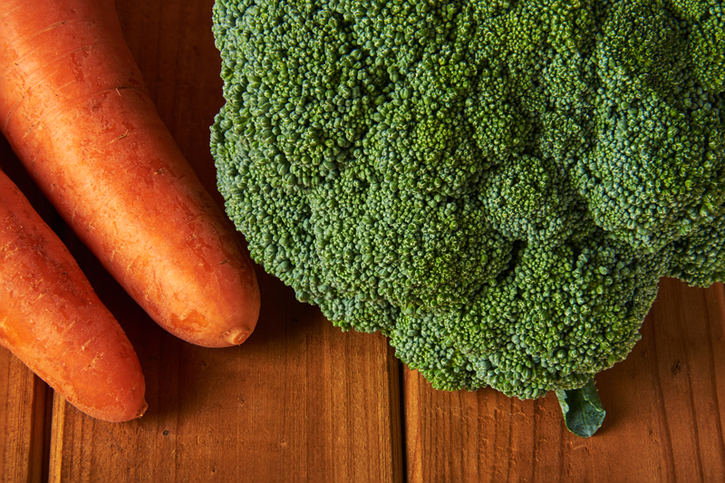 Foods that fight cancer? Carrots and broccoli are good places to start.

As a prior oncology nurse, I’m constantly asked, “What are the most effective foods that fight cancer?” The answer is less about specific foods than about ingredients. And according to evidence-based research, five ingredients rank higher than any other nutraceuticals, and each should be included as part of an anti-cancer diet.

So on your next visit to the grocery store, take this list as a reminder to stock up on items that boast cancer-fighting nutrients.

There are a variety of crops that naturally produce compounds that are:

Among them is tocotrienol, a member of the vitamin E family. (Vitamin E is an essential vitamin that cannot be produced in the body and must be obtained by food or supplements.) Studies have shown tocotrienol to exhibit anti-cancer properties.

But before you head to the health food store for vitamin E pills, know that buying a supplement may not be effective when it comes to fighting cancer. Why? Vitamin E is not a single compound; it includes at least eight “vitamers” named tocochromanols. These tocochromanols are divided into either “tocopherols” or “tocotrienols.” Tocopherols are saturated forms of vitamin E, whereas tocotrienols are unsaturated.

While all of this may sound like word salad, the point is that the tocotrienols are the specific nutrients in vitamin E with cancer-fighting (and cholesterol-lowering) abilities. Moral of the story: Get your tocotrienols in food form. Foods highest in tocotrienol include:

However, as part of an anti-cancer diet, palm oil, barley, and wheat germ should be avoided. Also, women with breast cancer or other reproductive cancers should not consume flax (click here to learn more about the dangers of flax).

Ellagic acid has been demonstrated by clinical research to fight against:

D-limonene is an oil nutrient (called a terpene), an amazing natural compound found in the peels of citrus fruits such as lemons and oranges. It is also an important ingredient of the flavor and aroma profiles of anise, black pepper, cinnamon, coriander, ginger, lavender, mint, nutmeg, rosemary, sage, thyme, and other herbs.

In laboratory studies, D-limonene has shown to have anti-inflammatory and anti-cancer effects. Specifically, D-limonene alters the signaling pathways within cancer cells that stops the cells from multiplying and also causes their death (apoptosis). In particular, D-limonene slows the growth of breast, colon, lung, stomach, pancreas, skin, liver, and head and neck cancers.

Sulforaphane is a powerful chemical that, when eaten, stimulates the production of antioxidant enzymes in the body that neutralize free radicals from external and internal sources. Sulforaphane is well-known for its antibacterial properties as it combats infections such as Helicobacter pylori (h. pylori), but it has been most touted for its anti-carcinogenic (anti-cancer) properties.

Sulforaphane is found in cruciferous and green leafy vegetables such as collard greens, kale, bok choy, cabbage, mustard seeds, cauliflower, Brussels sprouts, turnips, and turnip greens. But it is most abundant in broccoli, especially sprouted broccoli seeds. When following any anti-cancer nutrition protocol, broccoli is a must!

In the past two decades, isocoumarin has attracted attention due to its anti-cancer, anti-diabetic, antibacterial, antimalarial, and fungicidal effects. One miracle food in particular contains the highest levels of isocoumarin along with other cancer-fighting compounds: carrots.

The American Institute for Cancer Research notes that aside from isocoumarin, carrots also contain “numerous phytochemicals known for their anti-cancer properties. That familiar orange hue comes from the high amount of beta-carotene (converts to vitamin A in our bodies when consumed). Well-studied for its role in eye health, beta-carotene as well as alpha-carotene are important for immune function, maintaining healthy cells, and activating proteins that inhibit cancer cells. But you can also find purple, red, and yellow varieties, each containing their own unique set of health-promoting phytochemicals. Purple carrots contain anthocyanins, which are flavonoids; red carrots are a source of lycopene, and yellow carrots contain lutein, both carotenoids.”

So, there you have it… the top five anti-cancer nutrients. There are several other healthy foods, too, that fight cancer and are proven effective by clinical research, among them green tea, cherries, garlic, turmeric, and apple cider vinegar. But the five chemicals above rank as or with the highest and should be included in any cancer-fighting dietary regimen.