Home » Daily » Bones & Joints » 7 Things Soda Does to your Body: Soda, Pop, Cola, or Fizz, Whatever You Call It, It’s Time to Kick the Habit

While the debate rages on about whether or not sodas should be banned in schools and major cities, one thing is for certain: each individual can make a personal choice to limit or quit drinking sodas altogether. What about you? Are you ready to kick the colas and discover how to quit drinking soda for good?

Let us give you some incentive! Did you know that if you drank two cans of soda per day, you would gain approximately 1 pound every 2 weeks or about 26 pounds total in one year?[1] If this doesn’t motivate you to surrender your soda habit, we have an additional 7 BIG reasons listed below, and some of these may surprise you.

So, what does soda do to your body? Drinking soda is linked to at least 7 serious diseases 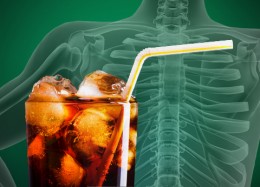 What about diet soda?

Despite its deceiving label as a “diet” beverage, diet soda is not a healthy alternative to regular soda. In fact, a growing body of research shows drinks with artificial sweeteners (like diet sodas) are associated with increased weight gain, diabetes, and heart disease. Learn more about the diet soda dangers here.

Now that you know how soda drinks negatively impact your health, learn how to quit drinking soda for good here!