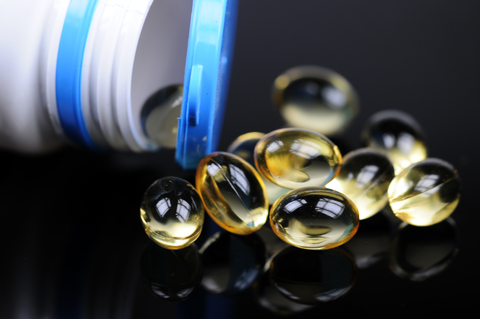 One of vitamin K’s important roles in the body is to maintain bone health.

For halting or even reversing osteoporosis, one specific form of vitamin K2 called menaquinone-7, or MK-7 for short, is proving itself in clinical studies to be far superior to other forms of Vitamin K. It wasn’t until about ten years ago that researchers even understood the important role of vitamin K in bone health. Since then, the vitamin K research has yielded confusing results. Studies have not shown a consistent benefit for vitamin K supplements for osteopenia and osteoporosis treatment. But some of those results may have been due to the particular form of vitamin K used in the study.  In fact, “vitamin K” is really an umbrella term for a number of nutrients some of which are less effective in improving bone density. However, the newest of the vitamin K sources in the research world and the vitamin K supplement market is a form of Vitamin K2, MK-7 or menaquinone-7, and it is showing very promising results.

The other vitamin K sources are nutrients collectively known as vitamin K2, or the menaquinones. While there is only one vitamin K1, phylloquinone, there are up to 14 different forms of vitamin K2, or menaquinones. Depending on their chemical structure, they are numbered MK-2 to MK-14. The menaquinones come mainly from microbes  produced in the gut or from  fermentation of certain type foods. Two of the best food sources of vitamin K2 are cheese and the Japanese fermented soybean product known as natto. However, the harsh taste of natto and the insufficient amounts of K2 from cheese alone have caused many to seek out an effective Vitamin K supplement as the most reliable way to ingest this critically important nutrient on a regular basis.

One of vitamin K’s important roles in the body is to maintain bone health. Vitamin K is needed for bone mineralization and maintaining calcium balance, two processes very important for bone health and strength. The three main sources of vitamin K that are sold as supplements are vitamin K1, MK-4, and MK-7. Supplements are sold containing one, two, or combinations of all three of these vitamin K sources, in widely varying dosages.

Taken together, the research data on vitamin K suggest MK-7 may be the preferred form of vitamin K supplementation for osteopenia and osteoporosis treatment, at doses of at least 100 mcg per day. The collective research data indicates vitamin K1 as a supplement is not necessarily beneficial, and MK-4 is more consistently beneficial only when taken in extremely high doses (45 mg per day). This is an amount of MK-4 not attainable through diet at all and fairly cost-prohibitive in supplement form for most people. Smaller amounts of MK-4 are known to have poor bioavailability, meaning the MK-4 is not readily absorbed and taken up by the tissues in significant amounts.

MK-7, on the other hand, was found in a 2012 study to be well absorbed and detectable in the blood even at very low dosage levels which are easily obtained through supplementation.[1]  Vitamin K2 in the form of MK-7 is also known to stay in the body much longer than vitamin K1 or vitamin K2 as MK-4. The research results on MK-7 supplements for bone health are also more encouraging.

Should You Take MK-7 for Natural Osteopenia or Osteoporosis Treatment?

While the research results on the various vitamin K supplement sources for osteopenia and osteoporosis treatment have not produced consistent results, recent studies show that supplementing with vitamin K as MK-7 at a dose of at least 100 mcg per day can lead to greater bone mass and lower rates of fractures in some people. And with the research on MK-7 for bone health now accelerating at a rate not seen before, the next few years are likely to reveal even more about the benefits of this amazing supplement as the leader of all vitamin K sources!

For more information on vitamin K and bone health: