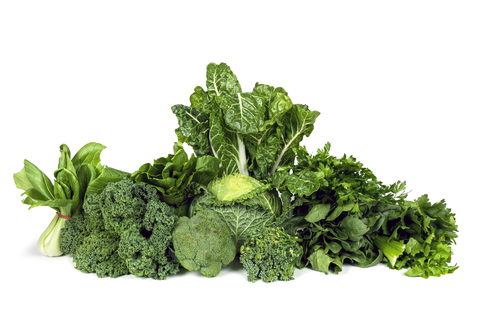 To consume 250 mcg vitamin K, the amount associated with a decreased risk of hip fracture, you would need to eat a large salad of mixed greens every day or a little more than 1 cup of chopped cooked broccoli.

You probably know there’s more to bone health and natural osteoporosis treatment than calcium and vitamin D. Do you know about the vital importance of vitamin K for healthy bones? Vitamin K, which is especially abundant in green leafy vegetables like kale, is essential for maintaining bone strength and plays a pivotal role in natural osteoporosis treatment. In fact, you can supplement with calcium and vitamin D all you want; but if you are not getting enough Vitamin K, your bone building efforts may very well not achieve the success you desperately need.

Vitamin K naturally occurs in two forms  — vitamin K1 and vitamin K2. Vitamin K1, also known as phylloquinone, is made by plants and is the form of vitamin K found in the foods you most often consume such as the green leafy vegetables. Vitamin K2 comes from animal sources and from fermented food products such as natto and sauerkraut. It is also made by your own gut bacteria. There are actually a number of different vitamin K2’s which are collectively referred to as menaquinones.

Both vitamin K1 and vitamin K2 can be taken as supplements. Most multivitamins contain vitamin K1, while a number of specialized supplements for bone health and natural osteoporosis treatment contain vitamin K2 (as menaquinone-7). This is because there is some evidence that vitamin K2 is especially good at strengthening bones, in part because it sticks around in the body for much longer periods than vitamin K1.

Numerous studies have demonstrated the importance of getting plenty of vitamin K in your diet for bone health. Large observational studies show that individuals who get the most vitamin K in their diets are much less likely to experience fractures.  Women in the Nurses’ Health Study, which followed more than 72,000 women for ten years, had a 30% higher risk of hip fracture if their vitamin K intakes were in the lowest quintile (1/5) compared to women with vitamin K intakes in the highest four quintiles.[1] Another study in over 800 older men and women found that those who got the most vitamin K in their diets (approximately 250 mcg/day) had a 65% lower risk of hip fracture than those with dietary vitamin K intakes in the lowest quartile (approximately 50 mcg/day of vitamin K).[2]

To consume 250 mcg vitamin K, the amount associated with a decreased risk of hip fracture, you would need to eat a large salad of mixed greens every day or a little more than 1 cup of chopped cooked broccoli. Nutritional organizations such as the Linus Pauling Institute recommend eating at least 1 cup of dark green leafy vegetables daily in addition to taking a multivitamin in order to have optimal vitamin K intake for bone health.

What About Taking a Vitamin K Supplement?

Whether or not vitamin K supplements work for natural osteoporosis treatment or prevention is still unknown. The results of studies are mixed and inconsistent, with some studies showing positive effects on fracture risk or bone mineral density and other markers of bone health, while other studies show no benefits over placebo.

The results of studies are especially difficult to interpret because a wide variety of forms and dosages of vitamin K have been studied (including a “pharmacological” dose (45mg) of vitamin K2 in the form of MK-4, popular in Japan). Also, some studies have combined vitamin K with calcium, vitamin D, and, in some instances, other nutrients as well, while other studies have looked at vitamin K supplements alone. Results for all these different scenarios have been mixed, with no easily identifiable pattern emerging.

Another reason the results of clinical trials have been so difficult to interpret is that many trials only look at bone mineral density. But there is some scientific evidence that while vitamin K may not significantly increase measurable bone density, it may still strengthen bones and decrease fracture risk by altering bones in other ways. For instance, a double-blind placebo-controlled trial in postmenopausal women with osteopenia but without osteoporosis found that a daily 5 mg dose of vitamin K1 for two years reduced the risk of fractures even though it did not protect against loss of bone mineral density.[3] It should be noted that this dose is nearly 60 times the US recommended daily dietary Vitamin K intake of 90mcg/day for adult women, but it was found to be safe and no serious adverse effects were reported.

To try and make sense of all the research, a group of researchers analyzed all the studies that have been conducted so far that have looked at the effects of vitamin K supplementation on bone mineral density. They published their results earlier this year, concluding that Vitamin K supplementation was shown to be efficacious in increasing bone mineral density of the spine but not of the hip, leaving even more questions unanswered.[4]

As a naturopathic physician, I recommend all my patients with osteopenia or osteoporosis eat green leafy vegetables every single day. In addition, despite the conflicting scientific evidence, I believe there is enough positive evidence for the safety and efficacy of vitamin K supplementation to warrant taking extra vitamin K in supplemental form (along with other bone building nutrients).

The exact form and dose of vitamin K which I recommend depends on the patient’s individual situation, preferences, and what she can afford. Because vitamin K2 in the form of MK-7 stays in the body much longer than the other forms of Vitamin K, it is the form I tend to recommend as a supplement. The typical recommended strength of your Vitamin K2 (MK-7) supplement should be at least 100 mcg per day. If you are considering starting a vitamin K supplement, remember to consult your health care provider first if you are taking Coumadin, warfarin or other anticoagulant medications. So to get the most out of your non-drug, natural osteoporosis treatment plan, eat those leafy green vegetables every single day and add Vitamin K2 (MK-7) to your supplement regimen. You’ll be glad you did when it comes time to play with the grandkids or go on that next vacation trip!

This post was published in 2012 and is regularly updated.